At long last, nearly seven years after it was submitted to the TTB (the Tax and Trade Bureau -- the office of the federal government that oversees wine regulation) we received news this week that the petition from the Paso Robles wine community to establish eleven American Viticultural Areas (AVA's) within the current Paso Robles AVA has been published for comments.  This is the critical step called a "notice of proposed rulemaking" at which the TTB (tasked, among its many other responsibilities, with protecting the public from misleading or confusing information about wine) has reviewed all the geological, climatological and historical information presented in the petitions and determined that they pass muster.  It doesn't mean that the region can start using them on wine labels this week, but it's an important validation of the proposed AVA's and boundaries, and the last step before final approval.  The map, as published for review, is below.  Click on the image for a larger version or here for the official PDF: 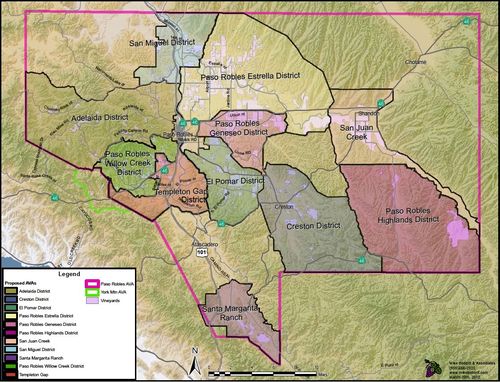 Over the next 120 days, interested parties (which, in this case, means pretty much anyone) can submit a comment at the TTB Web site in support of or in opposition to the plan.  I'm hopeful that with all the hard science that went into the petitions, and the broad cross-section of the Paso Robles wine community that was involved in their submission, approval will be relatively straightforward.  The Paso Robles AVA Committee included 59 different grower and winery members -- including Tablas Creek -- from every one of the proposed AVA's.

For the Paso Robles region, the publication for review of our AVA petition is an important and necessary milestone. Paso Robles is currently the largest un-subdivided AVA within California at approximately 614,000 acres. By contrast, the Napa Valley appellation (which includes sixteen AVA's delineated within its bounds) is roughly one-third the area at 225,000 acres. When the Paso Robles AVA was first proposed and approved back in 1983 it contained only five bonded wineries and less than 5000 planted acres of vineyard.  Big swaths of the AVA, including the area out near us, were largely untouched by grapevines.  In the last thirty years, Paso Robles has grown to encompass some 280 wineries and 32,000 vineyard acres.  This vineyard acreage is spread over a sprawling district roughly 42 miles east to west and 32 miles north to south.  Average rainfall varies from more than 30 inches a year in extreme western sections (like where Tablas Creek is) to less than 10 inches in areas farther east.  Elevations range from 700 feet to more than 2400 feet.  Soils differ dramatically in different parts of the AVA, from the highly calcareous hills out near us to sand, loam and alluvial soils in the Estrella River basin.  The warmest parts of the AVA accumulate roughly 20% more heat (measured by growing degree degree days) than the coolest; the average year-to-date degree days in the Templeton Gap since 1997 is 2498, while in Shandon far out east it's 2956.  This difference in temperatures is enough to make the cooler parts of the AVA a Winkler Region II in the commonly used scale of heat summation developed at UC Davis, while the warmest sections are a Winkler Region IV.  This is the equivalent difference between regions like Bordeaux or Alsace (both Winkler II areas) and Jumilla or Priorat (both Winkler IV areas).

[A quick aside. The southern Rhone is classified as a Winkler III region... and the fact that our proposed Adelaida District is a transitional Winkler II/III jibes with our experience that the same grapes ripen here slightly later than they do at Beaucastel.]

Our region's diversity was well noted in the TTB's ruling.  In addition to the longhand descriptions of each region's soils, climate and topography, the TTB included side-by-side comparative charts -- unique, in my experience of AVA approvals -- that detailed why each new AVA was worthy of being distinguished from its neighbors.  I can't imagine anyone reading these petitions and concluding that there wasn't grounds for subdivision.

All this is not to say that Paso Robles doesn't share some important factors, and one important hurdle that the petitions had to clear was demonstrating that the region enjoyed sufficient macro-level similarity to remain an AVA.  The TTB's ruling recognized several characteristics that the entire region shares, including the 40-50 degree diurnal temperature variation, the relatively warm climate with limited incursion of marine air, and the moderate rainfall, less than the slopes of the coastal mountains but more than the arid Central Valley to our east.

The AVA system is so powerful exactly because it has the flexibility to recognize macro-level similarities as well as important micro-level distinctiveness.  Think of France: that Burgundy shares overarching characteristics doesn't mean it's of no value to distinguish Chambertin from Meursault, or Chassagne-Montrachet from Volnay.  The appellation system, at its best, gives consumers both a broad-level understanding of what grapes will grow best and what character they should expect from the region's soils and climate.

One risk in the creation of new AVA's within an existing one is that the existing AVA -- into the marketing of which the local wineries have invested enormous amounts of time and money -- will lose much of its significance as many wineries abandon that appellation name to make a name for their new, smaller one.  Happily, Paso Robles won't lose its identity -- or the accumulated marketing capital we've all built over the last three decades -- thanks to a conjunctive labeling law passed by the California assembly with the encouragement of the Paso Robles Wine Country Alliance in 2007. Conjunctive labeling means that wineries who choose to use one of the new AVA's will also be required to use "Paso Robles" as significantly.  This law was modeled on one passed for the Napa Valley in 1990 that has been widely credited with helping maintain Napa as the most powerful brand in American wine.

The continued presence of Paso Robles on wine labels does not diminish the impact of having the different AVA's approved. These new AVA's will be a powerful tool for wineries to explain why certain grapes are particularly well suited to certain parts of the appellation, and why some wines show the characteristics they do while other wines, from the same or similar grapes, show differently. Ultimately, the new AVA's will allow these newly created sub-regions to develop identities for themselves with a clarity impossible in a single large AVA.

It's worth pointing out that no one needs to use the new AVA's.  Wineries who wish to continue to use only the Paso Robles AVA are welcome to.  And many will likely choose to do so as the new AVA's build their reputation in the market.  Not all the AVA's have a critical mass of established wineries, and it seems likely that a handful of the new AVA's will receive market recognition first, while the reputation of others will take time to build.  But I believe that it will be several of the currently less-developed areas that will benefit most in the long term, through the ability to identify successful winemaking models and build an identity of their own.  We shall see; having a newly recognized AVA is not a guarantee of market success, just a chance to make a name for yourself.  The cream will rise to the top, and consumers will benefit.